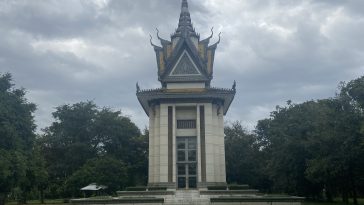 Pol Pot’s Legacy in Cambodia? What is it? And how does it affect everyday life in the Kingdom of Cambodia?

Since watching the film Killing Fields I have always had a a fascination with Cambodia and the Khmer Rouge. Ironically Facebook reminded me yesterday that it was six years to the day that I had first visited the Kingdom of Cambodia.

On previous visits I had seen places like S-21, the Killing Fields, as well as watching movies such as “First They Killed My Father”. After witnessing the places, seeing the films and watching the movies it is impossible not to feel physically sick about the horrors that occurred in such a short period of time between 1975-1979.

What always fascinated me was that even after being overthrown the Khmer Rouge not only continued to exist, but still had a decent amount of support, both from foreign governments and indeed Cambodians until they finally disbanded in 1998 with the capture of Ta Mok.

Pol Pot’s Legacy in Cambodia – How are people today affected by the Khmer Rouge?

When you pass through as a tourist and visit the various dark tourism “attractions” related to the rule of Pol Pot you are shown the gravity of the what happened in the past, as well as hearing harrowing stories from the many survivors of the era. It should be remembered that it only stopped 41 years ago. From a generational point of view it was yesterday.

The Government of Cambodia and the Khmer Rouge

Cambodia is ruled by the , or the CPP, who originally emerged from dissenting members of the Khmer Rouge, who backed by the Vietnamese other threw the government of Pol Pot.

The CPP currently rule Cambodia almost uncontested, controlling every seat in parliament. In the west the opposition often gets portrayed as some kind of heroes, such Sam Raimsy. But what the west often ignore is the opposition often use racism against Vietnam and alluding to the CPP being in Vietnamese pockets as their rallying call. These are the same tactics that were used by the Khmer Rouge. In actual fact Cambodians treasure stability much more than the abstract notion pf “western democracy”. And yes the west are hypocrites here. See the song and dance made about Hong Kong, whilst the gulf states are allowed to act as they please. The CPP and Cambodia are not perfect, but they are better than what preceded it.

And when it comes to governing systems Cambodia is looking more towards countries such as Vietnam, China, or Singapore than America. The recent US  has certainly not helped the western cause. Stability, and economic growth are what matters to peoples daily lives.

This might be a very broad statement, but I have heard it said by many expats and indeed locals that live in Cambodia. Khmer people are lovely, but when you get close to any local friend there is always a sadness to them. And this really isn’t hard to understand. Anyone you meet from 25-40 was bought up by survivors, or participants of the Khmer Rouge regime. The mother of one of my friends in Cambodia lost 8-11 siblings during the Pol Pot regime for example, and this is very common. I am yet to meet anyone (willing to talk) whose family did not lose someone, and usually in quite a horrific way. Another friend of mines 5 year old brother was killed because he stole a potato.

This means that the current generation of people living working, and running Cambodia were all bought up by either survivors, or collaborators. Cambodia has a collective PTSD that may take generations to overcome. This is not to say Khmer are bad people, far from it, but they are a troubled nation. This is Pol Pot’s Legacy in Cambodia

The Khmer Rouge are still in power!

There is no doubt that the CPP are decedents of the Khmer Rouge. It should also though be remebreed that they were also the liberators from its tyrannical rule. But in some places there had to be compromise.

Essentially to end the civil war in Cambodia it was tacitly agreed that if the Khmer Rouge defected they would be left to govern the areas they still controlled, namely the mineral rich Pailin, and Anlomg Veng. Both of these places were carved into their own provinces as part of the peace process and it is estimated that up to 60-70% of the population are ex Khmer Rouge. Of course they now govern as part of the CPP, but for all intends these are Khmer Rouge provinces. Therefore the people here tend to have a very different perception to the Khmer Rouge

What do people think about Pol Pot today?

This is another one of those funny questions that cannot really be given a blank answer. There are various apologists out there such as famous socialist dissenter , but overall these are very much a minority.

Amazingly there are people out there that still support some of the worst dictators in history such as Enver Hoxha, but even the most ardent of Stalinists are anti Pol Pot, but what do Cambodians think of him?

Again there is no one size fits all response to this and very few Cambodians outside of the heartlands of the Khmer Rouge have much great to say about his legacy. Sure some people do ardently hate him, but there is very much a spectrum when it comes to peoples views on the former leader of Democratic Kampuchea.

For this is needs to remembered that as well as being an absolutely sick interpretation of communism the Khmer Rouge was at its core extremely racist and xenophobic, particularly when it came to the Vietnamese. Sadly something the opposition in Cambodia also use to their advantage. It is easy to think during the current “Black Lives Matter” movement that white people are the only racists out there, but sadly that is not true. Cambodians have a long history of mistrust with Vietnam, and despite being “liberated” by the country in 1979, many people did not see it as liberation, but rather occupation by a foreign power. For many nationalists having your own bad ruler is considered better than having a “good” foreign one. For many years Hun Sen and the CPP were not seen as liberators, but as puppets of Hanoi by some. A view ironically still held by some. Realistically Cambodia is much more aligned with China now. Cambodians though can be quite racist. Not all, but certainly some.

I recently spoke to a rich Khmer friend who told me that she believed that Pol Pot was a patriot who made some mistakes (see similarities with the Chinese view on Mao) and that he probably “didn’t know” about all the bad stuff that was happening. She then explained that her uncle had been killed during the regime. Firstly he was an ex soldier of Lon Nol, and secondly because he said “No one kills Cambodians, just Cambodians kill Cambodians”. She went on to detail other sufferings her family had been through, whilst at the same time defending the legacy of Pol Pot

Some have argued that Pol Pot was not even the “real” leader of the Khmer Rouge. Something we have also written.

A conclusion on Pol Pot’s Legacy in Cambodia

This is such a deep subject that it is impossible to put it into the 1000+ words I have, but the legacy goes into every day life in so many big and small ways. Cambodia eat more bugs than any other country for example and that is not because they love bugs, but more to do with the habits that developed from surviving a famine.

You can read more about Khmer Rouge street food.

The world isn’t perfect and there is poverty in Cambodia. Sadly this can lead people to look back on things with rose tinted spectacles. The shadow looms large and the legacy of Pol Pot is not going anywhere soon.